An exhilarating mix of Indie, Jazz, Punk, Rock and Pop-Psychedelia. 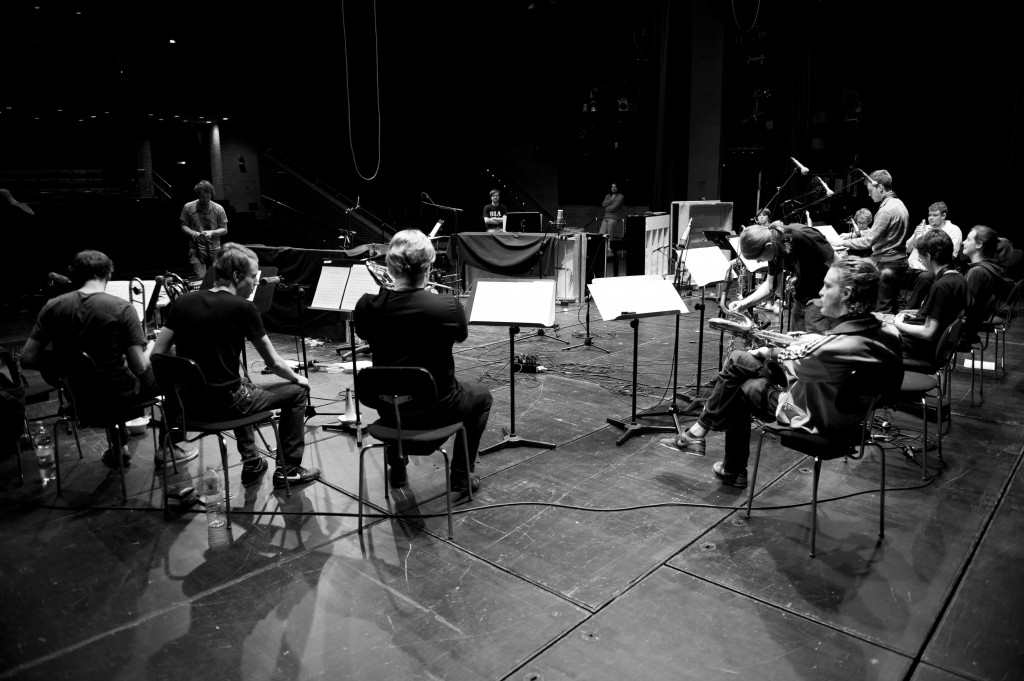 It was during a composition class at Munich’s academy of music that Monika Roscher’s Big Band first came into being. An original composition for big band ensemble was met with heaps of appreciation and praise, encouraging the Jazz guitarist (born 1985) to further pursue this line of musical adventure. Gathering friends and fellow students around her, who to this day form the band’s core, Monika’s graduation recital in summer 2010 was quickly transformed into her big band’s celebrated debut concert. Things moved forwards rapidly from that point. The band leader had barely left the backstage area when hugely impressed producer Philipp Winter approached her with an offer to record a debut CD. The resulting five-track-LP saw the band being awarded with a scholarship of the City of Munich 2011 – a mere six months after the band’s inception.
Sufficient time to defy virtually every musical expectation normally associated with a traditional big band line up. Whoever is thinking of swing in the spirit of Count Basie or Duke Ellington is flat out wrong. Roscher’s compositions may be firmly rooted in Jazz regarding spacious harmonizations and extensive improvisational parts. But her attention to aural texture and the emotionally accessible, pictorial vividness of her music suggest a deep connection with contemporary artists attributed to the indie, electronic and triphop scene. Taking her own musical experience as a starting point Monika Roscher thus creates a synthesis of different styles that neither feels contrived nor calculating.
Rather ‘dangerous’– at least this is what musician and poet Thees Uhlmann of German indie giants „Tomte“ had to say upon listening to the band during a newcomer programme on Radio Zündfunk. His verdict: „this shit is berserk!“ In December 2012 the band celebrated the release of their debut album „Failure in Wonderland“, released through prestigious Jazz label Enja Records, at Munich’s hot and hippest Indie temple, the Atomic Café. Press reactions have been enormous since then – among many others two of Germany’s biggest newspapers, the Süddeutsche Zeitung and Zeit Online, as well as Le Monde (France) and Downbeat (USA) were in awe of the band’s musical achievement.
2013 saw the band tour extensively throughout Germany and beyond. Some of the highlights were appearances at Fusion Festival (one of Europe’s most fresh and exciting art and music festival in northern Germany), the international Alto Adige Jazz Festival in Italy and a euphorically received closing concert at the Berlin Jazzfest where the band shared the stage with Jazz legend John Scofield. This concert was broadcast through several radio stations. German newspaper giant FAZ witnessed an „unbelievable technical level“ showcased by the young musicians and „the surprise of the season“.
In 2014 the band was awarded the Echo Jazz “National Newcomer of the Year”, a composer’s grant of the city of Munich and the Bavarian Art Sponsorship Award. Downbeat Magazine listed them as “Rising Stars” in their 2014 critic’s poll. In the summer of 2017 the band was invited to play at JazzBaltica and the recently inaugurated Elbphilharmonie Hamburg. Internationally the band toured Austria, Italy, Czech Republic, Russia and Turkey.
↑ back to top