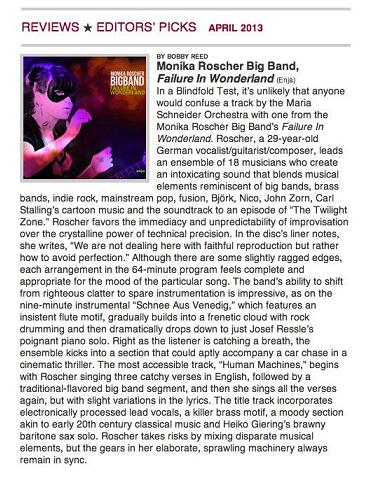 In a Blindfold Test, it’s unlikely that anyone would confuse a track by the Maria Schneider Orchestra with one from the Monika Roscher Big Band’s Failure In Wonderland. Roscher, a 28-year-old German vocalist/guitarist/composer, leads an ensemble of 18 musicians who create an intoxicating sound that blends musical elements reminiscent of big bands, brass bands, indie rock, mainstream pop, fusion, Björk, Nico, John Zorn, Carl Stalling’s cartoon music and the soundtrack to an episode of “The Twilight Zone.” Roscher favors the immediacy and unpredictability of improvisation over the crystalline power of technical precision. In the disc’s liner notes, she writes, “We are not dealing here with faithful reproduction but rather how to avoid perfection.” Although there are some slightly ragged edges, each arrangement in the 64-minute program feels complete and appropriate for the mood of the particular song. The band’s ability to shift from righteous clatter to spare instrumentation is impressive, as on the nine-minute instrumental “Schnee Aus Venedig,” which features an insistent flute motif, gradually builds into a frenetic cloud with rock drumming and then dramatically drops down to just Josef Ressle’s poignant piano solo. Right as the listener is catching a breath, the ensemble kicks into a section that could aptly accompany a car chase in a cinematic thriller. The most accessible track, “Human Machines,” begins with Roscher singing three catchy verses in English, followed by a traditional-flavored big band segment, and then she sings all the verses again, but with slight variations in the lyrics. The title track incorporates electronically processed lead vocals, a killer brass motif, a moody section akin to early 20th century classical music and Heiko Giering’s brawny baritone sax solo. Roscher takes risks by mixing disparate musical elements, but the gears in her elaborate, sprawling machinery always remain in sync.